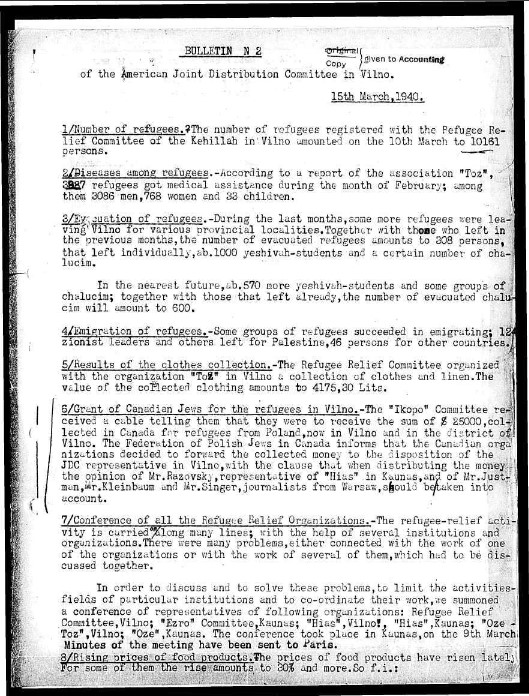 of the American Joint Distribution Committee in Vilno

2/Diseases among refugees. According to a report of the association „Toz“, 3887 refugees got medical assistance during the month of February; among them 3086 men, 768 women and 33 children.

3/Evacuation of refugees. During the last months, some more refugees were leaving Vilno for various provincial localities. Together with those who left in the previous months, the number of evacuated refugees amounts to 308 persons that left individually, ab. 1000 yeshivah-students and a certain number of chalucim.

In the nearest future, ab. 570 more yeshivah-students and some groups of chalucim; together with those that left already, the number of evacuated chalucim will amount to 600.

4/Emigration of refugees. Some groups of refugees succeeded in emigrating; 12 zionist leaders and others left for Palestine, 46 persons for other countries.

5/Results of the clothes collection. The Refugee Relief Committee organized with the organization „Toz“ in Vilno a collection of clothes and linen. The value of the collected clothing amounts to 4175,30 Lits.

6/Grant of Canadian Jews for the refugees in Vilno. The „Ikopo“ Committee received a cable telling them that they were to receive the sum of $ 25000, collected in Canada for refugees from Poland, now in Vilno and in the district of Vilno. The Federation of Polish Jews in Canada informs that the Canadian organizations decided to forward the collected money to the disposition of the JDC representative in Vilno, with the clause that when distributing the money the opinion of Mr. Razovsky, representative of „Hias“ in Kaunas, and of Mr. Justman, Mr. Kleinbaum and Mr. Singer, journalists from Warsaw should be taken into account.

In order to discuss and to solve these problems, to limit the activities-fields of particular institutions and to co-ordinate their work, we summoned a conference of representatives of following organizations: Refugee Relief Committee, Vilno; „Ezro“ Committee, Kaunas; „Hias“, Vilno; „Hias“, Kaunas; „Oze-Toz“, Vilno; „Oze“, Kaunas. The conference took place in Kaunas, on the 9th March. Minutes of the meeting have been sent to Paris.

It is obvious that such a rise of prices implies considerable difficulties for various institutions assisted by us, especially for those which are dealing with refugee-relief.

9/Legalization of the Kaunas Refugee Relief Committee. The first effect on the work of the „Ezro“ Refugee Committee in Kaunas of the Refugee Law of January 20th, centralizing all refugee relief work in the hands of the Lithuanian Red Cross, was to bring about practically a complete suspension of the fundraising activity of the former. In the first place, the Jewish communities in Lithuania flatly refused to contribute to refugee relief through the Red Cross because they had no assurance that this money would be used for the relief of Jewish refugees only. Secondly, the future legal status of the „Ezro“ Refugee Committee was not clear and its members therefore refused to take responsibility for further activities of any public character.

Despite continuing efforts which were initiated on January 22d, it has thusfar been impossible to obtain any clarification of the legal position of the Kaunas Refugee Committee. Although they are permitted to conduct the actual work of distributing relief for refugees, they do so as a sub-committee of the Lithuanian Red Cross and have no official standing as a Jewish communal welfare agency. The first suggestion made to the Lithuanian Red Cross provided for the organization of a Lithuanian Jewish society for the relief of refugees and war-sufferers, with membership open to anyone making annual contribution and thereafter responsible for raising funds, employing staff and carrying out the work of the society. It was contemplated that officially this society could be viewed as a sub-committee of the Lithuanian Red Cross and would be responsible to it for its methods of work and for an accounting of its funds. This proposal, which would have satisfied both the requirements of the Jewish communal organization and the provision of the Refugee Law, was at first favourably received by the Government. Subsequently, however, it was rejected on the grounds that the recognistion of such a society would require the Government to accept a similar proposal coming from the Polish group. This they refused to do for fear of the possible political activity of such an organization. Despite a suggestion that the difficulty might be avoided by recognizing a society for the relief of Jewish refugees and a society for the relief of Christian refugees in which Lithuanians and not Poles would predominate. It has been impossible to obtain the Government’s approval for the proposal.

A revised proposal for a lay committee in Vilno and a similar committee in Kaunas was accepted in principle by the Government. The Vilno Committee has in fact been recognized and exists as an organ of the Kehillah, but since the possibility of a fund-raising campaign in Vilno is still remote, the practical consequences of this recognition has thusfar been negligible. The committee is officially both an organ of the Kehillah and a sub-committee of the Vilna branch of the Lithuanian Red Cross.

In Kaunas, however, though a similar arrangement has been agreed to by the Government, the details of arranging actual recognition and having the Committee

begin to raise funds are still dragging on. Just what the difficulty is, it is hard to say, since repeated assurances are received that the matter will be disposed of in the next few days, as soon as various legal formalities have been complied with. In all probability, one of the chief difficulties is that the Red Cross officials, in whose hands the matter rests have little understanding of the nature of communal activities and of the importance of a lay committee for fund raising purposes. Consequently, with the exception of the provincial towns where a number of local refugee committees are operating unofficially, there has been no fund raising for refugee relief in Lithuania during the entire months of February and March. It is hoped, however, that the matter will soon be disposed of and the fund raising activity of the Kaunas Refugee Committee can be resumed. Thereafter, similar recognition will be sought for the provincial refugee committees. It is expected that a measure of central planning for refugee work in Lithuania can be achieved by an informal coordinating Committee of representatives of the Vilno, Kaunas and provincial committees.

11/Application of Polish professors. We have received an application from a group of former professors of the Polish state-university in Vilno, now liquidated by Lithuanian authorities. All former professors, being now unemployed, are in a very difficult financial situation. They request the JDC to grant them a subsidy.

The former deputy-principal of the University, professor Ehrenkreutz, called at out office in this matter. He pointed out that ab. 90 families of professors and assistants have no means of existence. The receive ab. $1000 from the so-called „Kosciuszko-fund“ in America, but this sum is not sufficient. Besides, this subsidy is not a permanent one, and it is not known, how long they will get it.

We have not given them any concrete answer as yet.

13/Passover-relief. In Vilno, as well as in the district, preparations for the Passover Relief campaign were made.

Ab. 35000 persons in Vilno and 10000 in the district, all of them belonging to the poorest Jewish population, will benefit from the Passover relief.